There are many options for bushwalking or rambling near The Bower on the South Coast of New South Wales. 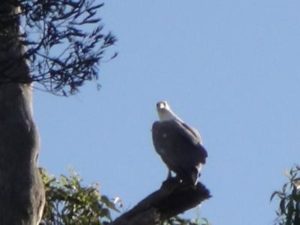 Illawong Nature Reserve is a 50 hectare wetland conservation area that adjoins The Bower. It can only be accessed on foot so we are fortunate to have this special neighbor.  There are management trails through the reserve that provide a relaxing walking route.  Illawong is also a bird-watcher’s paradise so bring your binoculars!

Illawong walk via The Bower

February hadn’t advanced far and we were still within the first half when I took a quiet and somewhat damp stroll along the Illawong Track. The woodland birds were fairly quiet, resting now at the end of a demanding breeding season, though there were a lot of Eurasian Coot calls from the swamp. There must be more open water between the reedbeds than can be seen from the waterside. I hear there are fairly large flocks of Coots around the Shire, perhaps here to take advantage of food stirred up by a few heavy downpours. A good rain sets the streams and rivers running, churning up the bottom mud and throwing out numbers of invertebrates and all the shrimp-like wetland dwellers. And rain is frog heaven, they revel in it and immediately set to breeding again, and again, and for as long as the rain falls and the warmth continues. Frogs constitute a large part of most waterbirds’ diet. Suffice to say, the Coots wouldn’t be at Illawong Swamp if there wasn’t a flush of food.

An interesting sighting was a young White-bellied Sea-Eagle at the nest tree. A female from the size (raptor females are larger than males) and, I think, in third-year plumage or assuming fourth-year. That means she is three to four years old, still very brown, but with vague outlines of adult markings beginning to emerge as buff or fawn patches here and there and an almost-white tail. I’m guessing a bit about her age and erring on the side of caution because it is difficult to tell if one is looking at a third, fourth or even fifth year bird; the stages of plumage differ from bird to bird and she could be moulting into, or out of, a certain stage. If you are studying the same young bird day after day, it’s much easier to judge the age by the changes you are taking note of so regularly. But it was my first sight of this young female.
It is difficult to find information on the age at which females are ready to breed, it’s generally accepted that males don’t breed till about six years old but there is little written about the female cycle. It would be logical to assume that the female would begin breeding earlier than the male, if only because her fertile years are more arduous and she is likely to raise more young, successfully, in the early years of her breeding than when she is older and her strength is waning. We will keep a close watch over the coming months when established pairs renew bonds and the ‘singles’ choose new partners.

There were still good numbers of butterflies around, though I saw only Common Brown females, the males have probably died off by now. Lots of little Brown Ringlets showing their orange ‘eyes’ as they rose from the grassy path and an occasional Meadow Argus. Along the fence line separating open country from the woodland, there were a couple of Swordgrass Browns (just the right place for them, close by the water meadows) and maybe half-a-dozen Black Jezebels.
Up on the slope, a couple of Jacky Lizards dashed for cover, miniature dragons with heads and tails held high. They will have already laid their eggs, safely stowed in the soft earth against a fallen log or a conveniently placed stone. There were Dark-flecked Garden Sunskinks, Lampropholis delicata, skittering off in all directions, easily a hundred in less than an hour’s walk. These are about the most common of the several skink species identified in the Shire. I never tire of watching them and find their gentle and trusting behaviour an absolute delight. Did you know that a colony of skinks in your garden will help to control the insect population? They eat an awful lot in a day! So be kind to them, give them a little pond and a few rocks and ground cover plants to shelter under in the winter. They will repay your thoughtfulness by reducing some of the pests that annoy you.
This article was kindly donated by the late Jill Whiter [founder of the Eurobodalla Natural History Society]. 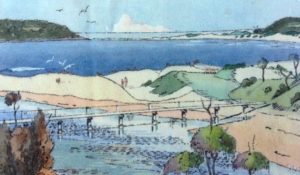 This diverse walk starts by winding through The Bower forest then crosses George Bass Drive and follows alongside Candlagan Creek to where it flows into the sea at North Broulee Beach.  Give yourself plenty of time to enjoy the journey and spend some time exploring or relaxing at the beach before you return.

The current bridge over Candlagan Creek was re-built in 2015 after the first vehicular bridge was built in the 1960s.  Prior to this there had been a footbridge across the creek, as shown in this 1950 painting. 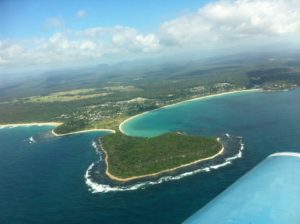 Broulee “island” is easily accessible as it is joined to the mainland by a sandbar. The island walk is very popular due to the wide range of native flora and fauna, in addition to the remnant artefacts of the early European settlement of the area.

Although originally mapped with a village layout in 1837, Broulee Island never experienced urban development. Lots were sold in 1840 but it was not until the early 1960s that the Council put blocks on the island up for auction. A few were sold, but in 1964 the Council had second thoughts, resumed all of the blocks and resolved to turn the island into a nature reserve.  It was formally declared as such in 1972.

Click here for more about other walks in the area.

Here is some extra info that may be of interest.

The Bower at Broulee

This website uses cookies to improve your experience while you navigate through the website. Out of these cookies, the cookies that are categorized as necessary are stored on your browser as they are essential for the working of basic functionalities of the website. We also use third-party cookies that help us analyze and understand how you use this website. These cookies will be stored in your browser only with your consent. You also have the option to opt-out of these cookies. But opting out of some of these cookies may have an effect on your browsing experience.
Necessary Always Enabled
Necessary cookies are absolutely essential for the website to function properly. This category only includes cookies that ensures basic functionalities and security features of the website. These cookies do not store any personal information.
Non-necessary
Any cookies that may not be particularly necessary for the website to function and is used specifically to collect user personal data via analytics, ads, other embedded contents are termed as non-necessary cookies. It is mandatory to procure user consent prior to running these cookies on your website.
SAVE & ACCEPT